Inspired by tales of Sir Lancelot and Robin Hood, plucky heroine Wilhelmina disguises herself as a knight in home-made armour and sets off on her farm donkey Rosina on a chivalric quest to rescue her freedom-fighting dad from Baron Boris Boris von Bummelkrackenhofer's deepest darkest dungeon. Will knows how to stand up to tyrants but nothing has prepared her for when Boris's daughter Edeltraut falls madly in love with her and wants to be rescued too.

The play promises madcap physical comedy, capers around castles, cod medieval dancing, damsels in distress, a ‘Punch and Judy’ show on the battlements, a jaw-biting joust to the death with life size kinetic steeds, and lots of original catchy musical numbers. 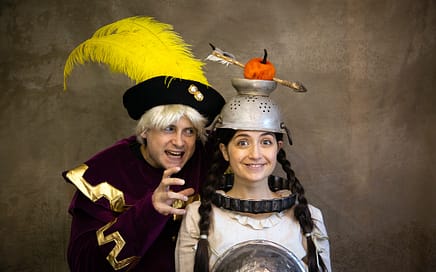 Mid-scale and small-scale versions of Will Tell and the Big Bad Baron will be touring from Autumn 2023.

Will Tell and the Big Bad Baron – is taking place at the Gilded Balloon (Patter Hoose) Edinburgh, from Wed 3 to Sun 21 August 2022 at 12pm (not 10, 17). Inspired by tales of Sir Lancelot and Robin Hood, plucky heroine Will Tell disguises herself as a knight and rides off on a chivalric Read More
View Calendar
Add